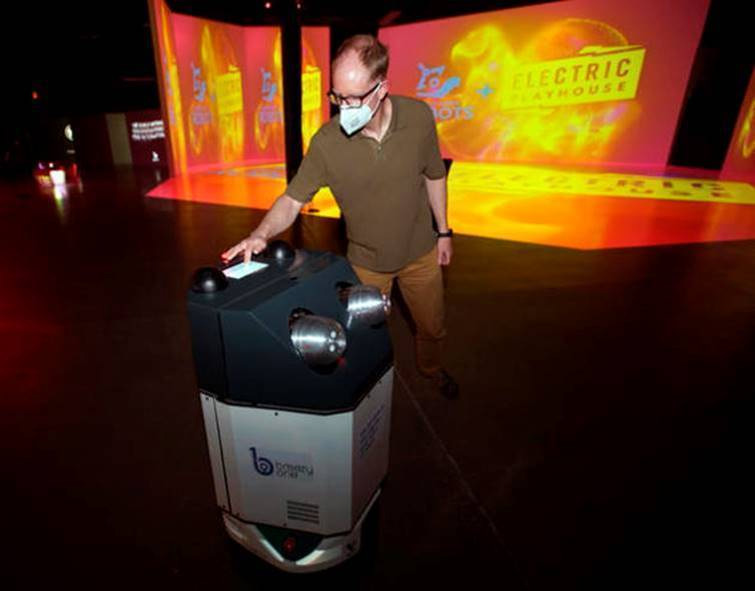 ALBUQUERQUE, N.M. — When the bosses are away, Breezy comes out to spray.

Breezy, officially named Breezy One, is a robot developed by small, local company Build with Robots, and has become the newest tool in the struggle to slow down the deadly virus responsible for the current pandemic

Build with Robots has teamed up with Electric Playhouse to premiere the automated robot, which will operate at the Playhouse after hours, spraying disinfectant on all surfaces in the company’s 25,000-square-foot building. The spray will be in addition to regular cleaning done by Playhouse staff.

Electric Playhouse opened in January and provides a space for interactive play that involves lights and images projected on the floors and walls of a large game space. CEO and founder John-Mark Collins said the business is still closed to the public, but is anticipating how it will meet new post-coronavirus safety standards when it is allowed to reopen.

“We see a lot of value in this long-term,” he said. “We are going to be using the robot in the evenings after we close. I’m happy it (cleaning) is going to be done in a consistent manner and that the spray reaches all the nooks and crannies we can’t.”

Typically, Electric Playhouse can see hundreds of people go through its doors every hour. Collins says he expects the state to require lower occupancy but that would still mean hundreds of people a day using the space, making it imperative it gets a good cleaning each night.

Build with Robots founder Chris Ziomek said his team has used the space at Electric Playhouse to test the robot.

The two companies held a demonstration Thursday for the media. The robot is a large cylinder about three feet tall. It holds 10 gallons of liquid and has two large nozzles on top that spray the disinfectant, which the robot converts into a fog-like mist. Ziomek said Sandia National Laboratories developed the non-toxic disinfectant, which can kill bacteria, viruses and remove pollen from the air.

Operators can control Breezy One remotely or from a screen on top of the robot. It is programmed with a route but can adjust when it detects an object in its way.

“Then COVID happened,” he said. “We realized construction was probably on hold for a while. Then we realized the platform could be used for other things COVID-related.”

He said his team of engineers and programmers pivoted their efforts and came up with a prototype in three weeks.

“The team was highly motivated with a clear goal,” he said. “They worked long, long days and nights.”

The company is still working out the kinks before making the robot available to more commercial consumers.