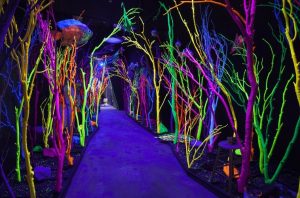 The Aquarium, by Matt King — with fish sculpted by Sarah Bradley.
Lindsey Kennedy/Courtesy of Meow Wolf

Doors opened March 17th to packed crowds. Attendance has been INCREDIBLE! More than 150,000 people have already come through the doors in the first three months. This exceeded the original business plan projections for the entire first year.

The 20,000-square-foot space was created by 135 artists, builders and writers and will continue to employ dozens of Santa Feans. The city has welcomed them, recognizing their contribution to the local economy with the City of Santa Fe Small Business of the Year Award (2016), presented by the Chamber of Commerce.

Media reviews have been glowing (see links to NPR and LA Times below, among many others). Patrons of all ages have returned time and again.

Meow Wolf’s benefits to local “Mid-town” are being noticed, as well. This neighborhood is little known as a destination and is economically middling. The location, bought by George R.R. Martin of Game of Thrones fame and leased to Meow Wolf, was an old bowling alley, empty for nearly a decade. Local restaurants report more than 10% increase in patronage since Meow Wolf opened. Partnerships are in the works with neighbor Duel Brewery to offer food and beverages on-site.